Interview with Kevin, a West Hampstead resident (for the second time!) 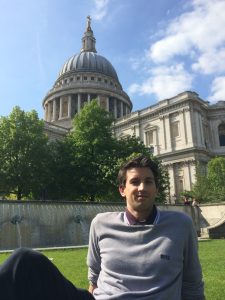 Name/Age/Occupation
Kevin Watson, 27, Flow Assurance Engineer
Which Springboard building do you live in?
West Hampstead
How long have you lived there?
I have lived there just under 2 months this time around. However, I previously lived there for 2.5 years!
What were the most significant factors which influenced your decision to move in to Springboard?
The first time I moved to Springboard, the most significant factor was the fact that you could socialize with like-minded people. I made many friends that I’m still in touch with 3 years later! Also, the location of Springboard West Hampstead is great, and it has amazing transport links and, in my opinion, is one of the nicest parts of London. The rooms in the West Hampstead building are also all en-suite which appealed to me.
Did Springboard live up to your expectations in these areas?
Yes, in particular the social aspect. As I said, during my first stay I made many friends that I’m still in touch with today. Now, I’m back at Springboard West Hampstead, the transport links make travelling to visit friends across the city really easy. I’ve also found that the 1 monthly all-inclusive bill payment makes renting and budgeting easy.
What are you favourite things about living at Springboard now?
All the things that I have described above. Also, that the place is so well managed. Rob is really very helpful and professional whenever there is anything that needs sorting.
Is there anything you would like to change or any recommendations you would make?
Not really, I’m very happy with everything.
Have you experienced any problems during your stay?
Nothing major, but I’ve had a few things go wrong over the years. Just problems with door handles, lights etc, but Rob is always very quick to sort any issues out.
Have you taken advantage of the Springboard social scene?
During my first stay I certainly made use of the social scene and always thought it was nice when tenants went for drinks in West Hampstead. There also used to be a regular film night I used to enjoy. I’ve been here less than two months this time around and I haven’t had the chance to socialise much due to being away with work, but the first time I regularly went out with other tenants, for drinks, to tourist attractions across the city and sometimes further afield on day trips to Brighton, Cambridge and Oxford.
What is your favourite Springboard story or memory?
The Summer of 2012 when the Olympics were on in London was a great time to be at Springboard. We’d all get together and either visit the Olympic events or watch them in the cinema room. It was a period of time when a lot of people socialised, and it was a real pleasure to be a Springboarder!
Would you recommend Springboard to a friend?
Definitely, it’s so much less stressful than ‘normal’ renting, due to Rob (the on-site landlord) solving problems so quickly, and the one all-inclusive monthly payment.  Also, if you choose to socialize, you’re bound to make some real good friends!
How would you sum up Springboard in your own words?
Springboard West Hampstead is a great place to live for a young professional or post graduate student. Whether it’s just for a nice place to live that takes the stress out of renting, or to make some new friends, or both, I would highly recommend it.
Have a read of my recent blog post to find out more about the West Hampstead area or click here to arrange a viewing.